Sailing around Australia; Score Check on the Waiting Game

I’d love to write this blog about the exciting sailing adventures we have had this week; but I can’t. For the past week we have made every attempt to amuse ourselves while locked inside the boat hiding from the weather.

Either way, we have reports from other boaties, mainly in the Newcastle area just north of Sydney, of boats and lives lost among much devastation. We certainly offer our condolences to all those affected.

Our experience was very strong winds and rain, rain and more rain. After a couple of games of scrabble, 36 episodes of a TV series called “Homeland” and  using up our months worth of internet in a few days, I came up with a couple of interesting ideas.

The first was to try and harvest the rain water.  I rigged a large funnel into the inlet of our fresh water tank. I’m not sure how much it caught and funnelled into the tank but I am sure that a few litres were caught and as they say every little bit counts, especially when it is clean fresh rainwater.

I also had a bucket on the back deck under a well known “dribble point”. I bucketed at least 120 litres into the tank from this source. On the third day of rain the tank was totally full.

The next idea was sort of forced on me. I wondered how long I could turn our freezer ( and Engel portable) off before it would start thawing out. This had been forced on me as the second day of the bad weather our portable generator decided it would rest rather than work. All we could do was try and conserve power as we watched our batteries drain to the critical point.

At the critical point we had to start one of boat’s engines and run it for a few hours to charge the house batteries up again. I calculated that we could turn the Engel off for up to ten hours a day. It would still be -1degree C so that's useful information for the future.

Next morning during a lull in the bad weather, we met the guy on the next mooring over, a local to Jervis Bay called Rick. Rick was on his way to shore to empty his dinghy, which the rain had half filled. He mentioned he had a car parked nearby and would be happy to take us into town.

Leanne and I jumped at the chance to get off the boat for a few hours and to replenish a few dwindling supplies, such as fruit and veg.

Fortunately I was also able to buy a new spark plug for our generator.

We travelled into the towns of Vincentia and Huskisson. Both lovely seaside holiday type places.  The town of Huskisson has some moorings just off the main part of town that looks like a great place to hold up for a few days, albeit in better weather than we have had this week.

As we have crossed the total of two bars or river entrances, we thought we would check out the possibility of going up the creek at Huskisson where many boats are moored. The sight of a dozen surfers ably surfing the waves on the bar certainly turned us off that plan.

The weather abated enough last night (night 6) for the 6 or so boats to get together for a sundowner.  The main topic of conversation was of course how we had all kept ourselves amused for the past four days and nights.

Today is a such a lovely day, you would wonder how the weather could be so violent. The other boats that have sheltered here including San Souci and Phase 2 have taken the opportunity for another hop northwards.

But, with north in the weather forecast, we will continue playing the waiting game until Tuesday, when conditions will be far more favorable for us. 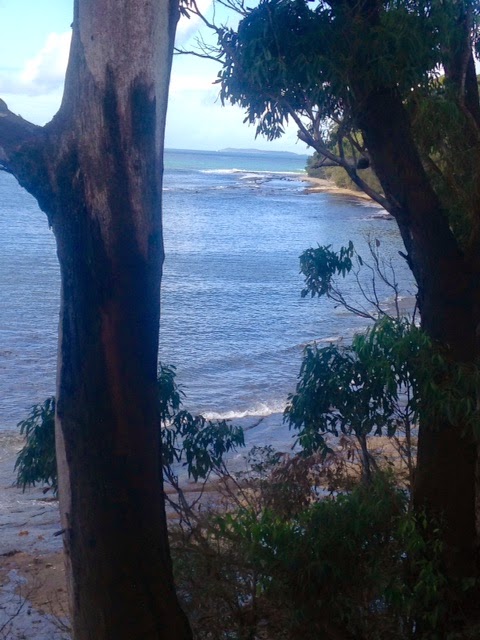