Sailing around Australia; The Week that Was

The Week that Was

In the blink of an eye a week has gone past, making it 2 weeks since we got back to Easy Tiger and preparations for continuing our sailing adventures.

We decided after a few days of scrubbing, rubbing and polishing, that a change of scenery might be nice. Marina Adelaide is a very good marina, and Richard the yard manager had been very helpful but the lure of moving (even if it ws just a few kilometres) was irresistible.

With the generous offer of a vehicle, we had a quick visit to another marina on the west coast of Adelaide called Crown Marina.

As there are shops, a tavern and the Cruising Yacht Club of South Australia all within walking distance of the marina, we booked in on the spot and will be here until the first week of February.

Easy Tiger hasn’t enjoyed being left for months on end with just water rats and sparrows for company. So we are very wary about what we will find as we start our preparations for the next part of our sailing adventures. For example, we had been told that there were sparrows nesting in our sail bag. So we hoisted the main sail to remove the nests but  couldn't get it down  because the mast car ball bearings were full of dirt and jammed. These small jobs I see as just part of having a boat, I said to myself as I spent the day cleaning out the mast track and the mast cars.

We had been cleaning up after water rats and sparrows for several days, so I hadn't had time to check the engines. Then came moving day. After firing up the starboard engine I soon found the next problem. The saltwater pump had seized.

Not to worry, I said. Just part of owning a boat. But, the further I got into the task the darker my mood became. As the saltwater pump is on the bottom of the engine, First of all I had to manouvre my body (182cms (6ft) and 90kgs) into the engine bay, then I had to lie on the engine, wrapping my arms around it, in a very intimate bear hug.

Anyone who has done a similar task would know that engines have many sharp pointy bits, arranged so that if you are lying on the top of one, giving it a bear hug, said sharp pointy bits stick into ones arm pits, rib cage and worst of all the area that men hold most dear.

This was so that I could twist my neck at a very unusual angle to be able to see one of the three bolts holding the water pump on to the engine. I could just get in to place to see the bolt that needed to be turned. What I couldn't see was approximately 2 centimetres above the back of my head, where there was a piece of aluminium which holds the steering cable. Every time I moved more than 2 centimetres I would bump my head on it.

To add to my mounting injury list and my darkening mood, after untangling my self and staggering to the phone, I rang the suppliers of the offending water pump. The supplier  told me that there were no new pumps in Australia and the price of supplying one ex Singapore is $1000!

After recovering from the shock, and while almost incapable of coherent thought, Leanne suggested I try WD 40 to try to get the pump spinning freely. Like any man whose wife makes such good practical suggestions, I gave an appreciative grunt then stated categorically that it wouldn't work. Just to humour her,  I used a couple of cans of  WD40 to drown the pump and had it spinning freely about ten minutes later.

Buoyed by that success it was back into my impression of an Indian rubber man, to renew my acquaintance with the lovely sharp pointy bits. After almost an hour of practicing my full vocabulary of curses, I had the pump back in place.

Relieved, I fired up the engine but; the pump was still not working. Another hour of bending at very un-natural angles and being continually prodded by the sharp pointy bits, I removed the  pump again and fitted a new impeller to the pump.

This time I was very circumspect about starting the engine. To my absolute delight, it pumped water as it should.

After a couple of hours to regroup and apply a few band aids, we did a weather inspection. It looked like thunderstorms were about to hit. Looking on the weather radar, the thunderstorms seemed to be going well north of where we were headed.
Another hour was spent looking at the weather and to-ing and fro-ing between leaving our safe haven or travelling around North Haven. By this time dusk was approaching. All of the above would normally mean that we would stay put.

Not being normal though, for some reason we both said at once, OK let’s go.  The ropes were thrown off at 7.00pm and we headed out into the river with huge black clouds off our starboard side.

Gladly, the hour long trip went by without incident and by nightfall we were tied in to our pen at Crown Marina, with 2 very big sighs of relief.

The surrounding area here at North Haven is much nicer than the industrial surrounds at Marina Adelaide.  The beach side walk trails have encouraged us to restart our exercise regime and the nearby tavern beckons for our weekly "date nights".

Also there are several other live aboard who we have met, each with stories to tell. 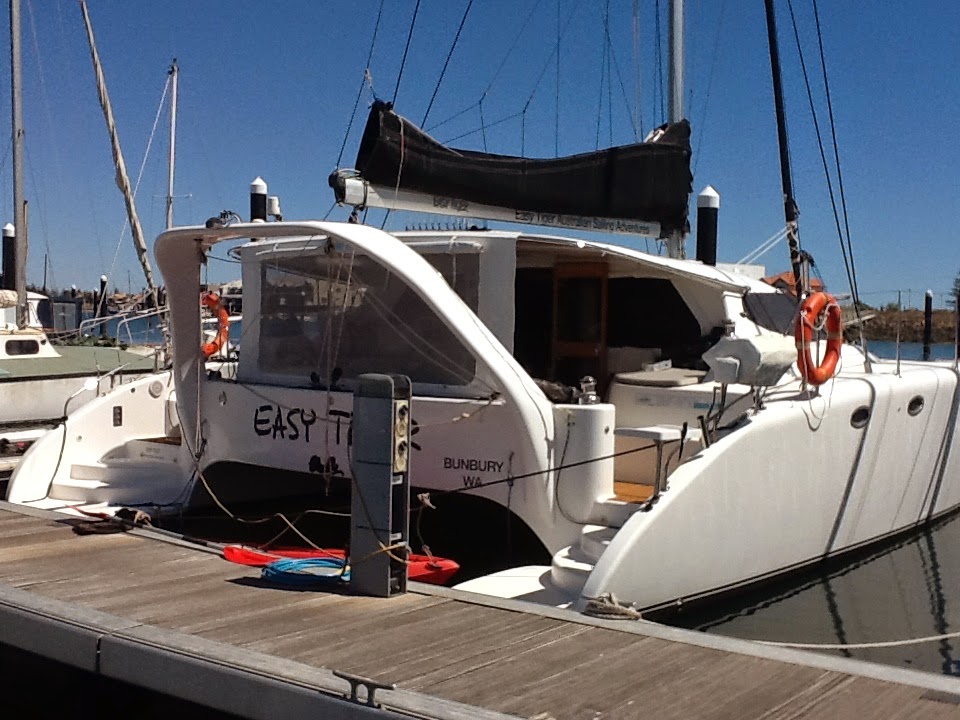