A group of people gathered at the Gold Coast in Australia with the common aim of setting off on a sailing adventure to New Caledonia and Vanuatu. They had been gathered together by one man who had sailed this path quite a few times before, and wanted to share his knowledge and love of the South Pacific with others.

In the middle of May 2017, 40 people had assembled aboard their various vessels. Quite like all the ingredients put together to make a really good fruit salad.

While these folk all had one thing in common (they were looking for an overseas sailing adventure), that is pretty much where the common thread ended and the differences began.

The first thing that set the apples apart from the banana's was the group itself. There was the "senior" brigade (people in their seventies) and then a mixture of age groups right down to gen y's in their 20's.

Into this rally salad there were passionfruit who had a wealth of sailing experience including crossing the South Pacific several times, to the pineapples for whom this would be their first time more than a few miles from the coast of Australia.

The peaches and grapes were defined by the various types of vessels that the people participating in the rally were preparing to sail the 800nm journey. There were 10 catamarans, 9 yachts (monohulls) and a trimaran.

Probably the greatest mix of all, was the differing backgrounds of the fruits. From Farmers to Engineers, Teachers to Computer Programmers, Business Owners to Retired Public Servants, this group is a huge cross section of the general population.

The peaches and grapes were defined by the various types of vessels that the people participating in the rally were preparing to sail the 800nm journey. There were 10 catamarans, 9 yachts (monohulls) and a trimaran.

After five, six or in some cases seven days at sea, the rally salad was thoroughly mixed together by the sense of achievement, having arrived in Noumea. Nowhere was this more evident than at the "arrival party" where the whole rally salad was served up, with the help of a French rock n roll band who cranked their amps right up as forty or so sailors with a huge sense of achievement let their hair right down.

Since then the salad has got off in many different pieces. Some headed north to explore, others went south to see what they could see. But each time their paths cross, we can hear or see the genuine camaraderie between apples, passion fruit, bananas and strawberries. Wether its helping out with a technical boat problem, recommending a marvellous anchorage or even just bragging about seeing a whale, the feeling of belonging to the group is evident.

It was also very apparent when 8 boats and their crews came together, (most went out of their way), to help celebrate Leanne's birthday.

Like the master chef's say, it's is the blend and the mixing of the distinct flavours the make this salad work and for that my friends I am going to give you a 10. 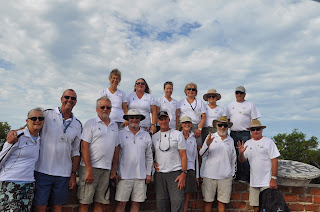