During our Sailing around Australia adventures I have found inertia another hurdle to be overcome.

Inertia, according to the dictionary is a property of matter by which it continues in its existing state of rest or uniform motion in a straight line, unless that state is changed by an external force.

For example, we were in a very happy "existing state of rest" in the confined and safe waters of Sydney Harbour.

I  lost my morning and evening routine of weather watching. While we were in Sydney we had pretty good weather. Most days there was blue skies and light wind. On days there was strong wind, protection was relatively easy to find in one of the many bays close by.

Also, while in Sydney, we didn’t have to plan for long voyages because it’s only a few hours motoring from one end of the harbour (say Manly) to the other (Parramatta river).

Added to this we loved having visitors on board such as our daughter Bree and Leanne's sister Sue.

So we were pretty comfortable and lulled us into a false sense of security.

The external force that is forcing a change to our state of comfort, is that Easy Tiger really needs some maintenance done. The bottom of the hulls that are permanently in the water, need a new coat of antifouling paint. We have barnacles and various other forms of sealife latched on and that slows us down when we are sailing due to the increase in friction.

Also most boats have sacrificial anodes. These are metal parts made from soft alloys and attached to other metal parts of the boat. The idea is that these anodes will corrode faster than the more important parts like propellers, sail drives and motors. Our anodes are almost totally sacrificed.

Leanne has gone through several bouts of ringing around. She has also “put it out there” to the Women Who Sail Australia network and the answer is almost unanimous. The most convenient, cheapest and best service place to have Easy Tiger lifted out of the water for maintenance is the Boat Works at the Gold Coast.

With that in mind and having spent a month in Sydney, we slowly dragged out the charts, logged on to the Bureau of Meteorology and started planning the trip to the gold coast.

The first step or leg in this journey was simply from Sydney harbour to the Hawkesbury River. Saturday, it seemed that that weather would allow a window of opportunity to sail north, so the date and time were set.

Friday, Leanne spent provisioning at Manly, while I went to the Laundromat.

Being almost winter, the days in Sydney reach an early end with darkness falling around 5.30pm. This meant an early night was had by all, even though we have Leanne's sister Sue on board for her birthday, ready for a 6.00am departure.

As usually happens though, the 5.30am alarm went off too early. It was still as dark as midnight outside and cold.

An attack of inertia set in. I started looking for excuses and or some way of delaying our departure for a few days. I asked Leanne if she would like to stay put. Fortunately, she was already in departure mode.

6 hours later we were tied on to a mooring in Refuge bay, near the entrance from Broken Bay to the Hawkesbury River. This is another of those exceptionally beautiful, serene, calm places.  The water is still, the bay is surrounded by steep tree covered hills. The only sound is the water trickling off the nearby waterfall.

There isn’t a breath of wind, but it is spitting with rain, fortunately. I say fortunately because Leanne and Sue are keen to go further up river in search of good fishing spots, but my inertia is playing up again.

Tomorrow we will have to deliver Sue to the Hawkesbury River Train station. That will be enough extern
al force to get us on the move. Then we really must make our way north to the Gold Coast.

The trouble is, that from what we have seen of the Hawkesbury and Pitwater, we would like spend some time here, and that is trouble because the longer we stay somewhere the more inertia takes hold. 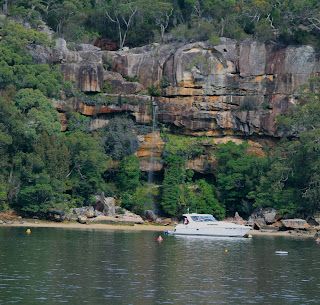