Sailing around Australia; Swimming with the Fishes 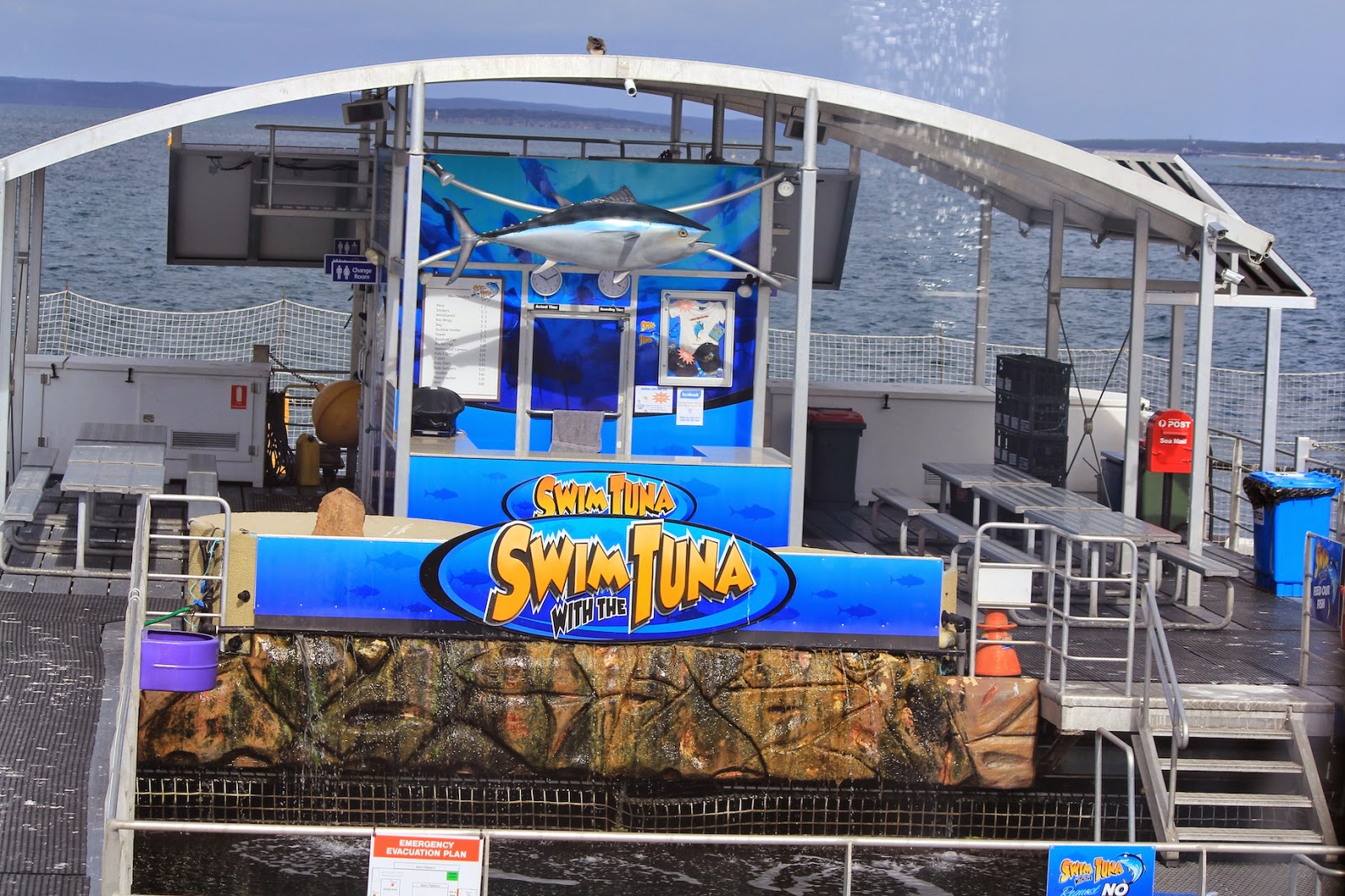 During our lay over in Port Lincoln, We have had quite a bit of idle time on our hands while waiting for parts and people to carry out propeller and anchor winch repairs.

We have got back into a routine of walking every morning as exercise. On these walks Leanne likes to seek out “the locals” for a chat.

One of our walks lead us to the local dive shop, where we ended up discussing types of equipment that would enable us to get under Easy Tiger for scrubbing off barnacles or to get fishing line off the rudder or other such times.

After looking at them in the shop, Leanne found a power dive hooker system on Gumtree, that we are waiting to arrive.

Leanne started trying on wetsuits, which I was very happy about. That meant that if she had a westsuit I may not have to be the selected diver in case of necessity. Without hesitation Leanne picked the wetsuit that looks like seaweed. She said she liked it, because she doesn’t look like a seal in the water and may not be attractive to sharks.

Leo, the dive shop guy, invited us to go out to the fish farm set up for people to “swim with the Tuna”.

So Sunday morning we arrived at the pick up point, hoping that the weather would improve from overcast and cold. We boarded a ferry type boat and headed out with thirty or so other folk all ready to be tuna bait.

After 20 minutes or so, the boat pulls up at fish farm ring. These are rings of floats in the water 50 metres in diameter. From the ring of floats, hang nets about 20 metres deep. The Swim with the Tuna has a big pontoon across the diameter of the rings, which has a change room, platforms, kiosk etc on it.

As the boat was being tied on we could see several dorsal fins, tail flutes and dark shapes near the surface of the water. It looked like a cage full of sharks. However the tour guides put our minds at ease, by saying that there were 55 tuna ranging around 50 kilos each and about a metre long. Those are Big fish.

After wrestling into our westsuits, me delaying the process, hoping for warmer weather, Leanne made her way down the platform and flopped into the water.  (her new wetsuit definetly looks like army camouflage rather than seaweed though).

The young tour guide fella, throws in a pilchard which lands in the water about 18 inches from Leanne. There is a woosh sound, a splash in the water and a giant tuna has come up from the bottom of the net, taken the pilchard and disappeared into the depths in the blink of an eye.

Not to be out done, several of it’s mates now realize it’s feeding time and all come up to the surface as well. That’s when we could plainly see how big these fish were.

By now I have taken some photo’s and have my wetsuit on. I flop into the water and paddle over to the floating seaweed wetsuit. A pilchard lands in front of my goggles. Too close. It’s millimeters away from my goggles. I try to swipe it further away. It floats closer and bumps into my goggles. I thrash it away as best I can. I expect any second that a 30kg tuna freight train will smash into me! I turn my head bracing for impact. Woosh! The pilchard disappears in a stream of bubbles.

More pilchards land in the water. Luckily they are further away from me and I can film the big Tuna as they whizz by on the go pro.

We then go into the middle tank, where 2 to 5 kilo salmon, bright blue morwhong and other various fish laze about. They keep bumping into us as we float. We are looking at them, they are looking at us. Well, looking at me. They aren’t supposed to be able to see Leanne in her camouflage seaweed wetsuit.

Almost feeling lazy, we went back in with the big Tuna until we were frozen numb. Climbing out I headed straight for a nice warm shower. Doh! They are cold.

We hurried up to the warmest part of the boat for the trip back to town. The wheelhouse. There we got talking to Dave the skipper. He is a part time skipper on the swim with the Tuna. His normal “day” job is abalone diving.  On the tour around the Port Lincoln wharf area, skipper Dave told Leanne that his mate does Tuna processing and she might be able to get some work there.

We would like to get a few months work when we get back from WA in June, to pay for all the boat repairs that we have to do, but hadn’t budgeted for.

The Tuna are certainly a very big industry in Port Lincoln. It’s one of only a handful of places in the world where they are successfully “farmed”. Each company has a quota that they are allowed to catch.

While catching them, they send planes out to “spot” the schools. Then they run nets around the schools but rather than haul them up onto the boat, the nets are dragged back to an area off Port Lincoln and parked. The fish are then fed every day until they are the desired weight, where Japanese buyers come and hand measure each fish.

So that means that I was swimming around with over a million dollars. Definitely a fun experience. If only it was a little warmer.